It takes heart to be a great city & Tokyo has plenty of heart and all the things that make up a great heart. Of course, all heart beats don't happen just in Tokyo. The Heart gets out & about Japan and even away from Japan. 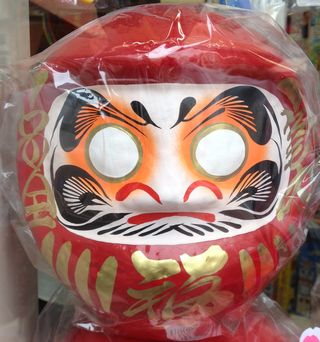 At the shrines, and in many shops, you’ll see roly-poly dolls with blank eyes (if they are for sale) or one eye painted black (if they are on display and owned by the shop).

These rotund dolls are known as Daruma (Dharma) and are modeled after Bodhidharma, the founder of the Zen sect of Buddhism, who lived during the 5th or 6th century CE.

They are typically red, but there are variations in the color and design depending on the region.

Daruma are most often made of papier-mâché, are round in shape, and are hollow.  They are weighted at the bottom so they always return to an upright position when pushed over.

They are often purchased during the New Year and the buyer paints one eye black while setting a goal, or making a wish for something they want to happen during the coming year such as an increase in business or other good fortune. When the goal is met, or the wish comes true, the other eye is painted black.  The custom of only painting in both eyes was said to have started in order to motivate the Daruma to grant your wish so you promise to give him full sight once the goal is accomplished or the wish comes true.

After New Year's Day people bring last year’s Daruma dolls to the temple where they have been bought. There they are burned in a special ceremony known as Daruma Kuyo. Then, they can buy a new Daruma at the same temple for the current year’s goal or wish.

Daruma come in many sizes from tiny ones that can be used for a key chain or phone charm to big ones that are displayed in the shops and offices.

The comments to this entry are closed.